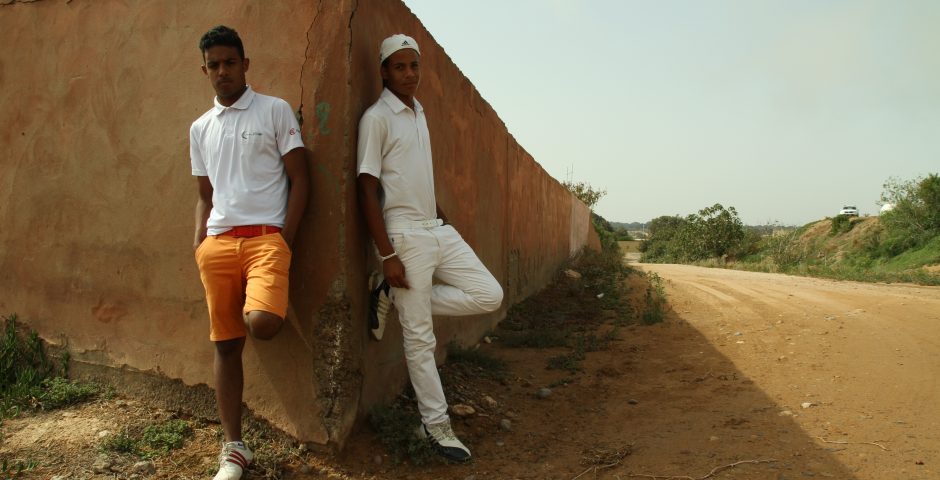 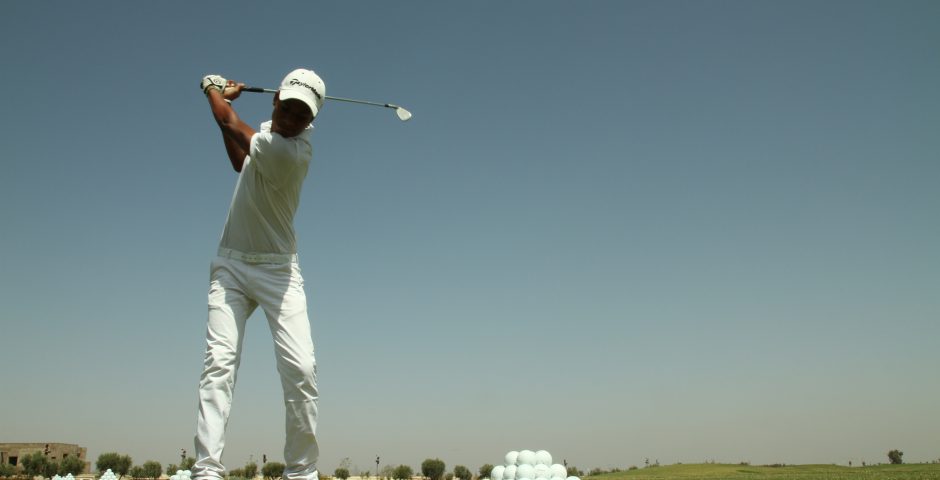 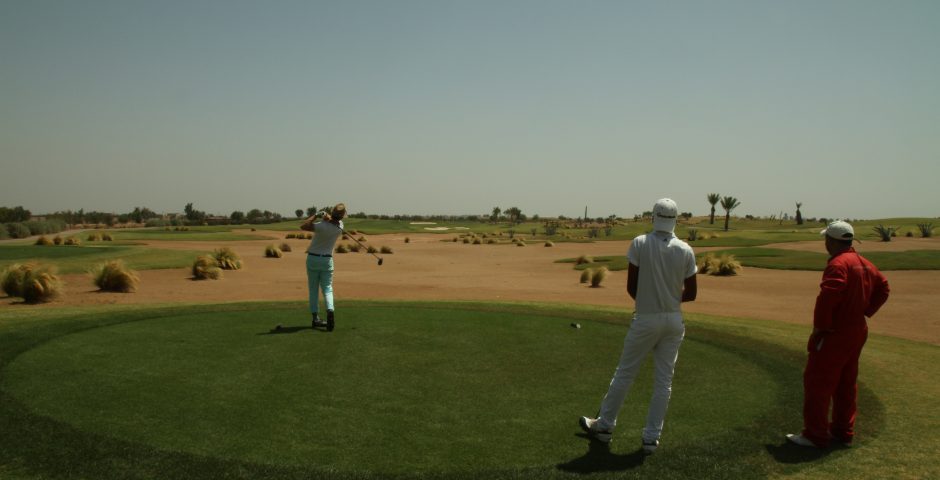 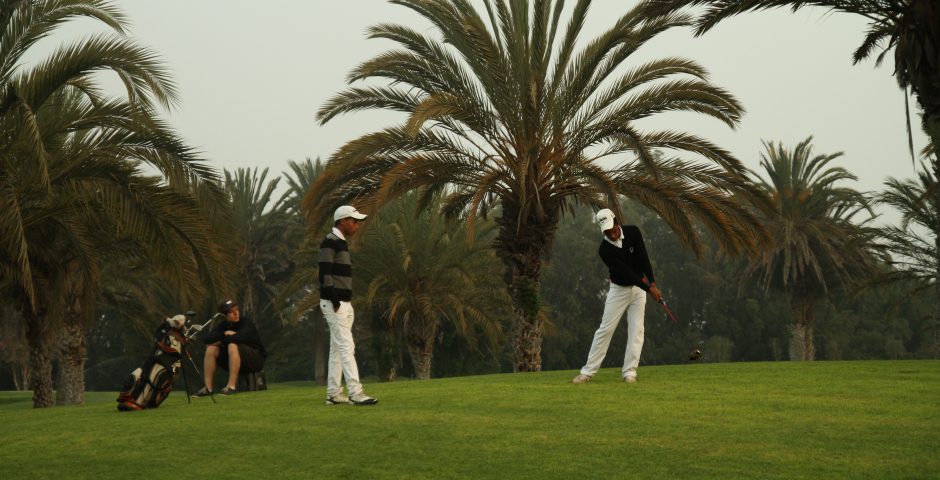 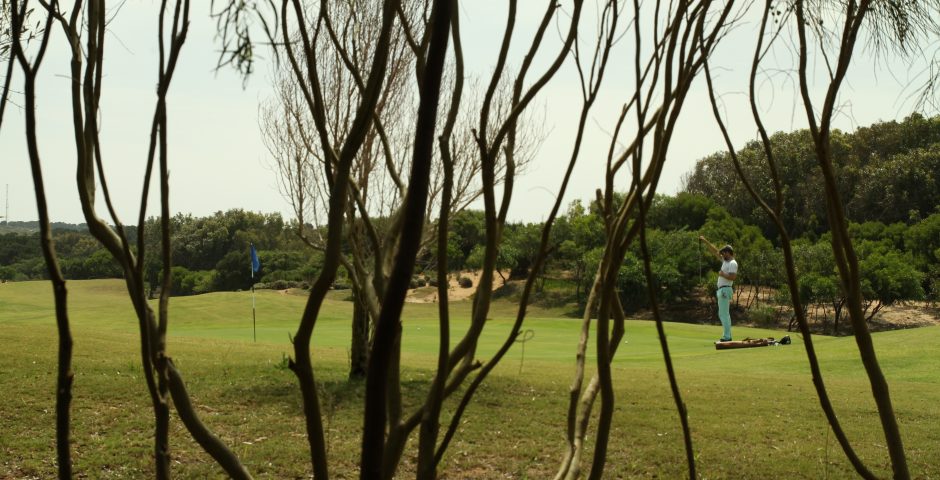 I met Assis randomly on the souk, a large Maroccan market, in Agadir – a mid-age man with a humble but radiant expression in his face. He was interested in the honey we had bought, so we got into a conversation. My eye caught a glimpse of a golf club logo on his cap, so I asked him about it. His eyes caught fire and proudly he started telling all about his sons playing among the best juniors in the country. He absolutely wanted us to meet them and invited us to a tagine for dinner.

A few days later with headed for the address he had given us with slight suspicion but very excited. Our surprise couldn’t be bigger: A provisory hut with corrugated roof, a bed room, a tiny kitchen, a living room with no windows and finally an 8 headed family waiting for us. In the middle of the living room stood a set of clubs and along the walls medals and trophies. Assis did not hesitate. A short prayer and then he cut straight through the throat on one of the cute rabbits the family owned. „You are special guests!“ he said and two hours later his wife served an amazing tagine that everybody gathered around and ate from with their hands. We slept on the floor and on the next day I set up for a first game with Jamal and Karim.

Today, two years later, we set up again for Morocco. This time to get some good footage for the new Bunker’s Up issue. Jamal and Karim are both on the national team in the meantime. We meet Karim in Marrakesh in the middle of the main piazza, the Jamma el Fnaa, one of the maddest melting pots in the world, where snake charmers meet story-tellers, gamblers, beggars and grapevine snails are among the delicacy. Hundreds of tents and trailers feed the consumption lust of people from all over the world till late at night, only to be all gone in the morning before being rebuilt again towards afternoon. Same madness every day. Karim seems tired but relaxed from last weeks trainings camp with the national team – a weird picture as he walks over the Arabic market with his golf clubs on the back. He – the kid we first met in the simple shelter – sure enjoys our company with a shisha, a few drinks and a visit to the posh finest nightclub in Marrakech. He doesn’t leave an opportunity to let the cyber world know what he is up to. Remarkable how he already manages to switch between the worlds – home where his father struggles every day to come up with food and money for the children’s education and the luxury world on the golf clubs with expensive cars, watches and royalty.

After four hours of sleep we head to Samanah Golf, a prime Golf destination in Marrakesh, the brothers favourite in the country. Karim is a gambler, the guy who loves to play for money even though he doesn’t have any in his pocket. Just like Lee Trevino said: «Pressure is playing for ten dollars when you don’t have a dime in your pocket.» Of course I don’t leave the chance for a match. Karim is tired and out of focus. To my surprise I’m three up after six holes. Karim laughs at me with an irritating self-confidence: «After nine we will be even, I swear!» Three holes and two birdies later his prophecy comes true. He kisses his putter: «This one is money!» Karim has the self-evidence of a champion. He believes he is the Moroccan Tiger Woods, at least that is the feeling he gives you. Time will prove whether his self-esteem serves his good or bad. I give my best in the battle, but arriving on the 17th Karim claims the victory with another birdy. I give him the money with joy, a little bit disappointed though since Karim would have cooked dinner for us if I had beaten him. «You know, on the course we are enemies, no laughter and friendly jokes, no matter if you play your fiercest competitor, your brother or the press», he sais with a large grin.

A two-hour drive takes us to Agadir and the Allali family’s home that hasn’t changed. Jamal is already waiting and opens the door to the yard. «Welcome to the farm!» he shouts out with a big smile. As every time the whole family awaits us with hugs and kisses. The Allalis openheartedness and kindness and their loving colloquial among each other touches me every time I arrive here. The fact that everybody is sleeping in the same room and that everyone must contribute for the well seems to bind them even more. Jamal takes his little sister Assisi, kisses her head and fools around with her. He is busy finishing his school, that’s why golf is only second priority at the moment. His father Assis wants it that way for a good reason. Education is a big topic for Assis. He wants his children in half private school since classes in the public ones are up to 60 pupils. As he can only afford three kids in school at a time they have to teach each other. Overwhelmed they accept the used laptop we have for them. The old one was already missing keys on our last visit.

Jamal takes the next morning off for the shoot on his favourite golf course in Agadir, «L’ocean». He is the thankful and modest guy, the oldest of the kids and has to manage many responsibilities. «Another week», he sais, «and I’m gonna be finished!» For the summer he has three months planned in France with a tough tournament schedule. It’s a privately sponsored trip – some lady that wants to help him on the path. But the biggest chance to get out there, he sais, is if he can find a golf college in the first world. That is his biggest dream. And then prove it to everybody… «I’m gonna be playing on the tour, I will!»

The two brothers couldn’t be more different. «Jamal is still better than me» Karim says. But I have two years to go. He smiles. To have your fiercest competitor in your family seems to push them to new heights. At the same time they quarrel and battle, they haven’t lost the brotherly loving, caring and pride. 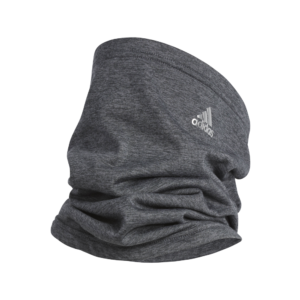